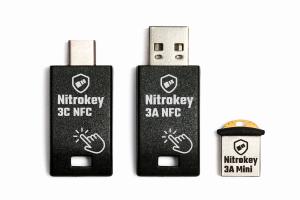 Due to the global electronics shortage, the Nitrokey 3 was unfortunately only available in limited quantities. This has finally come to an end! In the last few months we have been able to ship all pre-orders of the Nitrokey 3A NFC and Nitrokey 3A Mini and have built up a stock of these models. So these Nitrokeys can be ordered here and will be shipped immediately from stock.

What is an OpenPGP Card?

OpenPGP is an open standard for encrypting, decrypting and signing documents, files and emails, mainly used with GnuPG. Storing cryptographic keys on a smart card such as the OpenPGP Card allows the same key to be used securely and conveniently on multiple devices. If the device is lost, the cryptographic keys remain securely stored in the Nitrokey and cannot be extracted. The OpenPGP Card can be used for email encryption, SSH authentication and many other cryptographic use cases.

One-time passwords (OTP) belong to the first generation of two-factor authentication and are very common. Our test firmware supports the two popular methods HOTP (HMAC-Based One-Time Password, RFC4226) and TOTP (Time-Based One-Time Password, RFC6238). Currently, several dozen OTP entries can be stored and used. In a later version more than one thousand entries should be possible. Currently, only the command line software pynitrokey is available for use. In the future, we will support one-time passwords in the graphical Nitrokey App 2.

All essential features of the OpenPGP Card and one-time passwords are already implemented. We are still missing support for the Secure Element and some internal improvements and refactorings. We plan to implement this in the first half of 2023 and then release it as a stable firmware version.

We recently started running a blog in which we report on our development progress and technical topics in more detail. In the blog we cover topics that are too technical or too marginal for the readers of the general news section. If the news section is not enough for you and you want to read more from us, feel free to follow our blog.