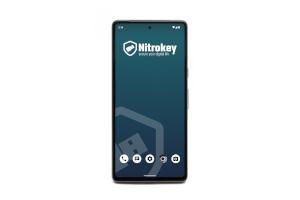 Submitted by gntl on 2. December 2022 - 15:41
Hey, Any news on an updated NitroPC? The 10th gen processors in the current one are starting to fall behind.
Submitted by meissner on 2. December 2022 - 15:48
Hey hey, nope - no news yet for a next gen NitroPC to share...
Submitted by Domevelo Muenda on 9. January 2023 - 20:42
I ordered such a phone with microphone and sensors removed and the headset for communication. After a month the headset has malfunctioned and communication is not possible.
Submitted by meissner on 10. January 2023 - 12:01
I am sorry to hear that - this should not happen. Please write an e-mail to support (at) nitrokey (dot) com together with your sales order identification number (SOxxxxxx) and we'll replace the headset.