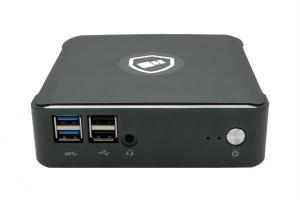 We are excited to publish our new NitroPC - A secure mini PC with latest Intel i7 CPU (10th generation) and fully open source firmware and software.

Powerful, Up-to-Date Hardware
The NitroPC has a current 10th generation Intel Core i7-10510U processor with up to 4.9 GHz and an m.2 SSD with 6 Gb/s, and can thus be used for performance-hungry applications such as programming/compiling and graphics applications. Of course, this also makes it sufficiently equipped for office and web applications.

Open Source Firmware/BIOS
The firmware ("BIOS") consists of the open source systems Coreboot and Tianocore UEFI. This enables independent security audits of the firmware and prevents undetected backdoors. In addition, the PC boots quickly and future enhancements are possible. All PC operating systems including Windows can be used.

Disabled Intel Management Engine
Vulnerable and proprietary low-level hardware parts are disabled to make the hardware more robust against advanced attacks.
The Intel Management Engine (ME) is a type of separate computer within all modern Intel processors (CPU). The ME acts as a master controller for your CPU and has extensive access to your computer (system memory, display, keyboard, network). Intel controls the code of the ME and severe vulnerabilities have already been found in the ME that allow local and remote attacks. Therefore, ME can be considered a backdoor and is disabled in NitroPC.

Optional: Pre-Installed Qubes OS for Highest Security Requirements
Instead of Ubuntu Linux, you can get your NitroPC pre-installed with Qubes OS 4.0 and full disk encryption.
Qubes OS enables highly isolated working by means of virtual machines (VM). A separate VM is started for each application or workspace. This approach isolates applications and processes much more than conventional operating systems. Qubes OS keeps your system secure, even if a vulnerability has been exploited in one of the software applications used. Example: If your PDF viewer or web browser has been successfully attacked, the attacker cannot compromise the rest of the system and will be locked out once the VM is closed.
In addition, separate virtual workspaces can be used, such as an offline workspace for secret data and an online workspace for communication. NitroPC with Qubes OS is technically similar to SINA clients (for governments), but remains transparent thanks to open source. Qubes OS is for users who want maximum security.

Sealed Enclosure
To make it difficult to tamper with your NitroPC, the case screws are individually sealed. We will send you photos of the seals, which you can use to verify if the case has been opened without authorization during transport or at a later time.

For everyone
With NitroPC, you don't have to rely on the security of proprietary BIOS firmware or the backdoor Intel Management Engine. Instead, the secure NitroPC is based entirely on open source software. NitroPC comes with hard disk encryption pre-installed and - if desired - the highly secure Qubes OS. Since it has a powerful 10th generation Intel i7 processor, the NitroPC is also suitable for power-hungry applications.

For Enterprises
The NitroPC can serve as a hardened workstation for Certificate Authorities and other use cases that require high-security computing.

For Government
Government agencies can use the NitroPC to protect against Advanced Persistent Threats (APT) without relying on third-party proprietary technologies.

For Journalists
If you're an investigative journalist serious about protecting your confidential sources, NitroPC can help.

As a Mini Server

The NitroPC is suitable as a small server for home and office.