You may not have heard about the Crypto Stick 2 in the recent time but a lot of things are going on under the hood. Let me share a few updates of our progress towards Crypto Stick 2 during the past few months:

After receiving and testing the first batch of device samples we fixed a few bugs in the PCB layout. The revised new layout of the hardware is easier to assemble and smaller but still not stable. Currently we work with the second PCB revision but it's not clear whether the PCB layout or the production process is the cause for problems we are experiencing. But this is the usual hardware development process and nothing unusual. It will take a few more weeks and potentially another round of sample production to finalize the hardware.

On the software side, we have the mass storage encryption implemented already and we will focus on improving and testing it. In addition we are working on a HTML interface allowing to configure the Crypto Stick. But we aren't running a web server on the device. Instead we just store a HTML file on the mass storage drive. Users can open it with any web browser and use it to configure the Crypto Stick (e.g. change passwords). The HTML file uses JavaScript to store user's input in a local file. The device detects updates of the local file and subsequently processes the user configuration data. The file is used as a kind of input-output interface.

In addition we are also considering to build-in plausible deniability which would be a really cool feature! It would allow users to securely encrypt data in a volume/partition which can only be revealed with a second password. Without knowing the correct password, nobody would be able to proof whether this hidden volume exists or not. Technically it would allow users to plausibly deny the existance of the hidden volume even when put under pressure. However, we haven't finalized the design yet. One challenge is to identify the sectors occupied by the data of the primary volume. This is required to determine the space available for the hidden volume without corrupting the primary volume. Let's see if we can make it into the next release or not...

On request of an enterprise customer, we built a retail package for development purposes. It consist of a larger PCB (than the normal) with additional debug ports, a cable, MicroSD with SD adapter, and a special version of the OpenPGP Card with future features such as AES. This kit can be used for development and measurement purposes and demonstrates that our technology development is on the right track. 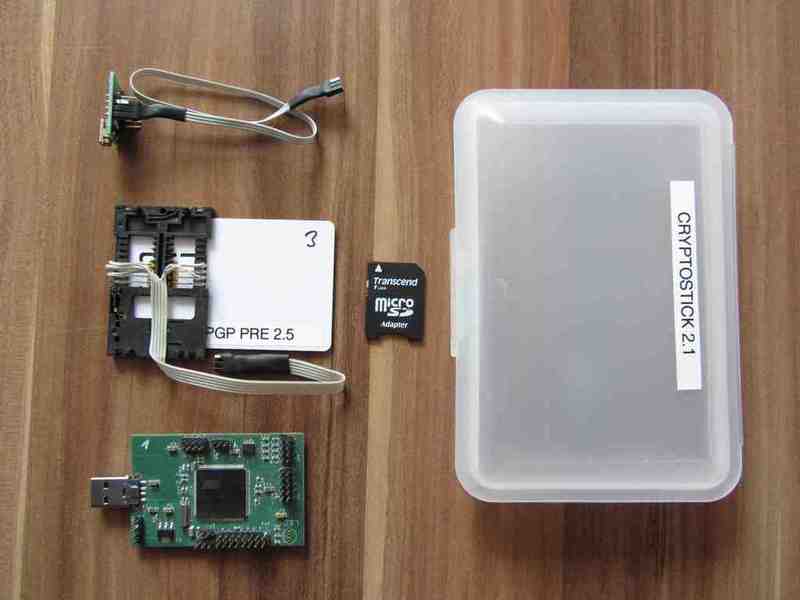 We plan to launch a semi-public beta phase once the Crypto Stick 2 is stable enough. It will probably consist of about hundred devices for sale (to cover the manufacturing costs) to users for testing purposes. Let us know if you are interested. When the Crypto Stick 2 will become available? We stopped committing to any particular date. :-) Just subscribe to our blog, newsletter or Twitter and stay tuned.